Kimbo on the Scorpion King- Battle for Redemption

"Don't miss the "Rumble in the Heartland" Main Event World Title Fight featuring KIMBO SLICE, a national fan favorite who started out being recognized for street fighting, shown on web videos and later competed in professional mixed martial arts fights and is now involved in Professional Boxing….and that's not all! The Fight Night will include 6 other fights on the card featuring top ranked fighters from around the world; watch them take it to the ring!"

ESPN writes on Kimbo's debut into the boxing world, click image to read

The Kimbo store has been updated with 4 Team Kimbo T-shirts, available in Small - XXL.

The Kimbo Slice store is now open to the public!

"Last month at UFC 110, the organization announced Kimbo Slice vs. Matt Mitrione at UFC 113 in Montreal, Quebec, Canada, on May 8. Slice (4-1) won his Octagon debut in December, defeating Houston Alexander via unanimous decision. Meanwhile, Mitirone (1-0), a former NFL player, won his MMA and UFC in December, knocking out Marcus Jones in the second round. Both fighters were cast members on the 10th season of The Ultimate Fighter. "
Read More at MMA Fighting» 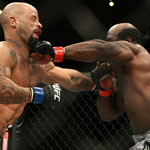 "Slice outpointed Houston Alexander in a unanimous decision victory at "The Ultimate Fighter 10" Season Finale on Saturday at the Palms Casino Resort. Scores from the 215-pound catchweight bout were 30-27, 29-28 and 29-28."
Read More at Sherdog »

Kimbo Slice vs. The Bouncer

Kimbo fights a bouncer in a bare knuckles professional street.

The fight that started it all.

White talks about why Kimbo is on the show.

Kimbo gets interviewed by ESPN E:60

Bas Rutten trains Kimbo Slice to take on veteran MMA brawler David "Tank" Abbot at the main event of the next EliteXC card slated for Feb. 16, 2008.

Mayhem Miller heads up to Bas' gym to have lunch with Kimbo and the gang.